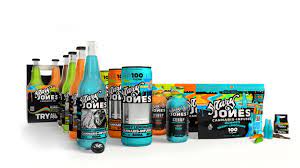 Jones Soda company has decided to test the waters of the cannabis market. They have recently launched cannabis-infused products such as sodas, gummies, and syrups. All of these new problems will be introduced under the new brand name of Mary Jones.

Jones Soda is most well known for its specialty craft sodas. It is a publicly-traded company so this appears to be a bold move for a company of this stature. However, in comparison to companies like Coca-Cola or Pepsi, they are much smaller.

The move to add a cannabis lineup seems a bit risky on the surface given that cannabis is currently illegal under federal law. It’s a line that most of the food and beverage makers have not been willing to cross. Sometimes that type of attention is a good thing but it can also lead to other headaches.

While cannabis has not made much headway in the food and beverage space there has been progress made with hemp and CBD.  For instance, Pepsi recently launched a new line of hemp-infused energy drinks from Rockstar. While even that seemed a bold move from Pepsi, hemp is nowhere near as controversial as cannabis.

Jones Soda knows it’s not a major player in the soda market. That may well be why they are more willing to take this type of risk. In 2021 they reported revenue of $14.8 million. To put it in perspective that is around .04% of Coke’s revenue in the same time period.

“We’re a small player in soda, but we’re going to be the biggest national player when it comes to a recognizable [consumer-packaged goods] name in cannabis,” Jones Soda marketing chief Bohb Blair said in an interview.

Blair said, “If we crack it in California, we’re going to do gangbusters as we go through the Midwest and East,”. Our guess is that you will start seeing the new Mary Jones products moving across the country in 2022.

The company considered adding CBD instead of cannabis. In the end, they went the edgier route of cannabis as they felt it was a better fit for the brand they have built.

In California, the cannabis-infused products will be sold at dispensaries. The company feels that it will help set the new Mary Jones products apart from the non-cannabis version. On top of that, the new packaging will be a hint to customers.

It’s a big undertaking for Jones Soda but they feel confident that the results will be there. “We have been putting all of these pieces in place since we announced our intention to establish a cannabis division last July, and we fully expect the brand to deliver solid strategic growth for the company,” CEO Mark Murray said in a statement.