The #1 Thing People Get Wrong About CBD 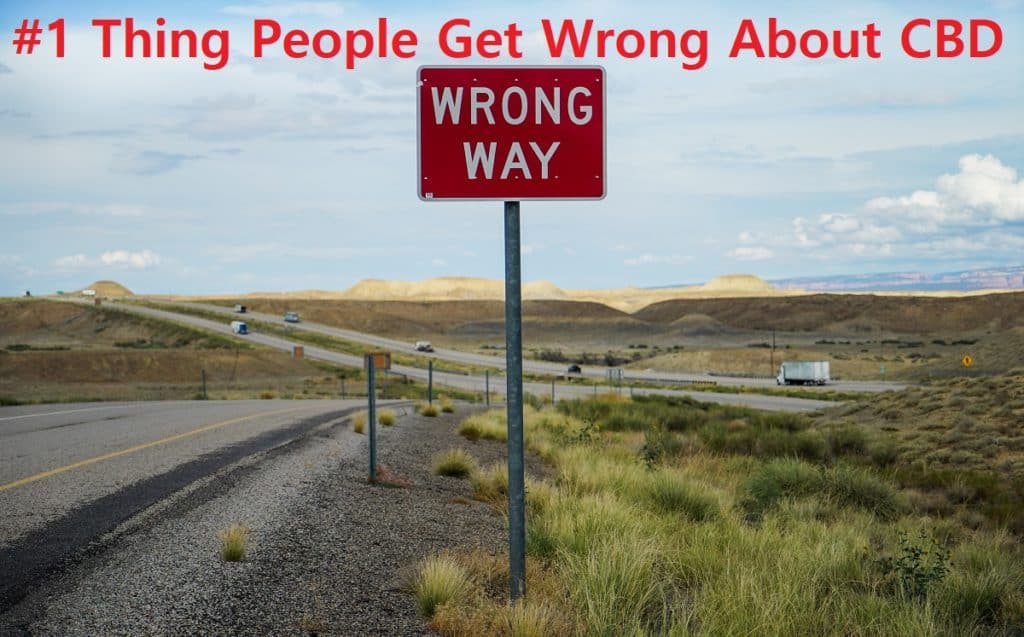 So much has been discovered about CBD in recent years, and the popularity of its products only continues to grow. But despite these recent advances, there are still many misconceptions surrounding CBD.

It never ceases to amuse me whenever I’m in line at a store, whether it be a gas station, pharmacy, or even Family Video, and witness the glowing of one’s eyes when they first notice a glass bottle with a hemp sticker on it. They look at it as if this product somehow managed to sneak by the law and end up in their hands. Like the weed gods had handed them a gift.

And to be fair, it’s not entirely the fault of consumers for thinking this way.

CBD and its products can do a lot of good things, but there is a fair amount of misinformation surrounding them that people tend to believe. Luckily, we’re here to talk about some of those misconceptions and what the number one thing is that people get wrong about CBD.

Cannabidiol, more popularly referred to as CBD, is a cannabinoid found in the cannabis plants hemp and marijuana. It was first isolated by scientists in the 1930’s, and has slowly gained popularity and acceptance over the past several decades, with a spike in popularity occurring in the past couple of years.

CBD that is found on the shelves of convenience stores all across the country is extracted from hemp. It’s the topic of several research projects due to its discovered health benefits that it can provide, including the treatment of anxiety and pain.

CBD comes in a variety of products, with some of the most popular including:

We are still continuing to learn more about CBD and its effects on our bodies. Many still fear these products due the amount of unknown information surrounding them. However, the only known side effects that have occured from using CBD have been mild, such as drowsiness and fatigue.

A lot has been discovered about CBD in recent years, especially with the increasing number of research projects being conducted that studies hemp and its derivatives. But just because researchers and scientists understand more about CBD doesn’t mean that consumers have also kept themselves informed.

There are still many common misconceptions about CBD that exist today, with some of the most popular being:

The Agriculture Improvement Act of 2018, also known as the 2018 Farm Bill, was signed into law on December 20th, 2018 and changed the definition of marijuana to exclude hemp so long as the plant material contained 0.3 percent or less THC. Consequently, hemp and its derivatives, such as CBD, also became legal for production and sale.

The one exception to CBD’s legality is when it’s infused with food and drinks. As of now, CBD-infused food and beverages are illegal for sale and consumption.

Because states have their own independent rights to create laws surrounding hemp, some CBD products sit in a gray area of legality. For example, you can purchase smokable hemp in several states; however, Texas has outlawed smokable hemp flower.

CBD Is A Marijuana Product

The majority of consumers can’t tell the difference between a hemp and marijuana leaf, leading them to believe that CBD products belong to the more popular of the two. However, CBD products are derived from hemp, not marijuana.

Because so many people believe that CBD is a derivative of marijuana, they expect immediate results upon taking CBD.

Although some CBD products work faster than others, such as smokables and topicals, using CBD for overall relief is a process that takes time. Once you have a consistent schedule with taking CBD, you will have a constant flow of it in your body that’s constantly working to reduce your symptoms.

CBD Is A Placebo

Some people believe that CBD only works as a placebo, meaning that it’s only made to make you believe you’re getting results when in reality, nothing is happening.

It’s important to understand that CBD is NOT a placebo, and its effects on the body are very real. If CBD were a placebo, it would have been discovered by scientists long ago and not nearly as much time would be spent on research present day.

You can find a lot of stories online to counter this misconception as well. Many people love to share their CBD success stories to help spread awareness of its uses.

The #1 Thing People Get Wrong About CBD

Above all other misconceptions about CBD, there is one that wears the crown. One that takes the cake. One that rises above the rest. One that —  Well, you get the point.

CBD Can Get You High

The biggest misconception about CBD is that you can get a high from using it. Again, it’s believed that this misconception is bred from the belief that CBD is a product of the marijuana plant.

It also contributes to the belief people have that CBD should work instantly. They expect the CBD to “hit” them similar to how THC does when it’s smoked. But there is a big difference between the two compounds.

CBD is nonintoxicating, meaning that it won’t alter your mind in any way that gives you a “buzzed” feeling. No matter how much CBD you consume (and we don’t recommend trying it), you will not get high from using it.

The high that people believe they will get from using CBD is the same one they receive when using marijuana. The THC from marijuana creates a euphoric effect for the user. This euphoric state is often referred to as “being stoned.”

Instead of a euphoric high feeling, CBD will result in an overall feeling of relaxation. Instead of raising your heart rate, it is known to lower it and help provide relief for feelings of anxiousness; something that THC can cause.

To state it plainly: CBD will NOT get you high.

What Causes These Misconceptions?

There are also a couple other factors that are worth noting when it comes to misconceptions about CBD: Fake advertisements and lack of regulations.

Fake advertisements are responsible for a lot of misinformation surrounding CBD products, especially when the ad is pushing a fake CBD product.

When COVID-19 was originally announced a pandemic, there was a massive spike in predatory companies advertising their CBD products as “miracle cures” for symptoms associated with the coronavirus. Luckily, the U.S. Food and Drug Administration (FDA) was able to step in and issue warning letters to these companies that forced them to change their marketing or face a shutdown.

The FDA has been promising federal regulations for CBD products for a while, but something always seems to get in the way. As a result of “not being approved by the FDA,” CBD is believed to be dangerous by many uninformed individuals. Hopefully there will soon exist permanent and clear regulations for CBD, and people can begin trusting its capabilities more.

Hopefully as CBD’s popularity continues to grow, so will its acceptance. In the meantime, the best thing we can do is help direct others toward accurate information regarding CBD, such as here at The CBD Guru.

As hemp works its way up the chain of useful commodities, it can be expected that a rush will be put on regulating CBD. So long as no overbearing restrictions are put in place when that time comes, the CBD industry should be set to continue down its path of growth. Thanks for reading and, as always, stay safe out there!